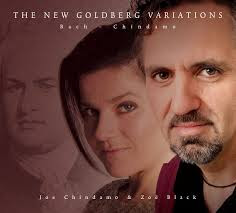 The old and the new are ever-combining lately. Not that such a thing has not been happening throughout the history of humanity, but every era or period has something peculiar to it in the way it happens, at least musically. I don't have a full picture in my mind about the present yet, but early music and baroque music have offered possibilities for new music amalgams a good deal in the past half-century, it seems. And there have been successful hybrids to come out of that idea, surely.

A fascinating and effective example of this can be heard on The New Goldberg Variations (ALFi 15002). It is Johann Sebastian Bach's complete "Goldberg Variations" with a stylistically consistant, new counterline on the violin written by Joe Chindamo. Joe plays the piano part for the recording and Zoe Black takes the violin part.

The result is a new work, born of the old. The violin part adds a good deal to the music, a second or third voice in the counterpoint much of the time, and occasionally a reinforcement of the piano line, the latter of which remains just as Bach wrote it. Sometimes we get a kind of variation within a variation; other times an extension of Bach's contrapuntal thinking. Chindamo creates a sympathetic and very credible, even wondrous work out of it all.

Zoe Black and Joe Chindamo sound very buoyant, very spirited together here. Both are from Australia. Joe composes and both can play in a jazz mode apparently, but that is not what is happening on this album.

I was prepared to be disappointed, only because the "Goldberg Variations" have gained such an iconic footing in their original form that I wondered about the need of adding to them. I was wrong. The "New Goldberg Variations" are not meant to replace the old ones. They give you a fine new look at what can go with it all, a second work that can take its place proudly next to the original and be experienced as a nicely variant set of variations.

For all that I am fully satisfied and elated with this recording. It is a must for all Bachaholics as well as anybody looking for a new sonic experience. Bravo!